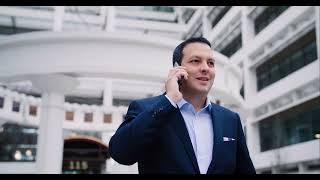 For nearly 11 years, Dax Lopez served as a judge on the State Court of DeKalb County where he presided over complex criminal and civil matters.  As only the second Hispanic judge on a court of record in the history of Georgia, Dax was known to be an efficient, fair, and just jurist who earned the respect of lawyers and litigants alike.

Born in Puerto Rico, Dax moved to the US at the age of six, and he still speaks Spanish fluently. A graduate of Vanderbilt for both undergraduate and law school, he began his legal career by serving as a law clerk to Chief Judge Héctor Laffitte of the U.S. District Court for the District of Puerto Rico from 2001-02. Prior to his appointment to the bench, Dax was a trial lawyer at three prestigious law firms in Atlanta specializing in complex civil matters, business litigation, product liability, and employment law.

Throughout his legal career, Dax has received numerous recognitions. Dax has been named as one of the Top Fifty Industry Leaders by the Atlanta Business Chronicle, among Georgia’s Legal Elite by Georgia Trend magazine, and as a Rising Star in 2009 and 2010 by SuperLawyer Magazine. In 2010, Mundo Hispanico named Dax to be the Funcionario Destacado del Aňo. In 2011, Dax was named by Georgia Trend Magazine to be among the best and brightest 40 Under 40 and by The Fulton Daily Report to be among those in the legal profession who were “On the Rise.”  He is also the recipient of the Justice Benham Community Service Award.

Dax mediates cases of personal injury, wrongful death, medical malpractice, product liability, and premises liability. In 2015, President Barack Obama nominated Dax to a vacant seat on the Federal District Court for the Northern District of Georgia. Unfortunately, Dax did not receive a hearing in the U.S. Senate and his nomination expired at the end of President Obama’s term.

Dax is married to attorney and State Representative Zulma Lopez. Together they are the proud parents of four children: Roberto Carlos, Sebastian, Elisa, and Leo. He is also a passionate soccer fan.