Thu, Dec 2nd, 2021 | by Miles Mediation and Arbitration | Get to Know our Neutrals | Social Share 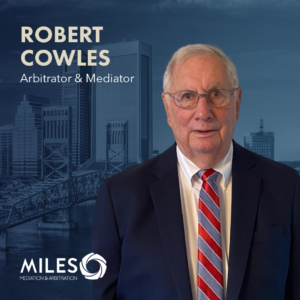 Robert Cowles started his career in the insurance industry with Travelers Insurance Company. He has been certified as a Circuit Court Mediator in Florida since 1991 and was active in getting the mediation program started in North Florida. He has mediated over 2,500 cases.  He has also handled arbitrations for the American Arbitration Association since 1992 and has been an Arbitrator in over 350 cases including commercial cases, Lemon Law, breach of contract, business disputes, employment, construction, actuarial malpractice, fraud, maritime, and hospital/insurance disputes.

When I graduated from UNC, I did not know what I wanted to do. I took a job as a Claims Adjuster with Travelers Insurance Company. My Manager was transferred to Atlanta and he helped me transfer there to go to law school at Emory Law School—first at night and then the last year full time during the day. I was transferred to New York City by Travelers in 1967 and after 4 months I realized that my time in that job, and in that city, was done. I went back to Atlanta and into full-time as a student at Emory Law.

What is your area of specialization?

My background is that I have been a trial lawyer for over 50 years. I started as a lawyer in Atlanta and came home to Jacksonville in 1971. I was initially with a large multi-city law firm in Florida. I handled all types of cases. My first early specialty was medical malpractice. Then I began working on product liability cases.  With two other lawyers, I started my law firm which grew from 3 lawyers in 1976 to 1983 to 17 lawyers. I have also been a Mediator and Arbitrator since 1992. I am a former Circuit Court Judge too.

I am most proud of the fact that I have done almost everything within the practice of law, including handling large complex cases. I have been a Circuit Court Judge. I have handled cases for the American Arbitration Association since 1992. From 1997 to 2000, I was on the Board Certified Civil Trial Lawyers Committee and was Chair in 1999. In 1996 I had a product liability case, Medtronic v. Lohr, which went to the US Supreme Court. We won. It involved a medical device case but its relevancy was to all medical device-related cases. It was voted “Case of the Year” in 1996 by the American Trial Lawyers Association.

Why did you become a Neutral?

I  became a neutral after I left the Circuit Court Bench in 1991. Mediation was just beginning in Florida and I assisted the Judges in implementing the new law and preparing documents for mediation.

That is difficult to say because of how far it has already come. The biggest change recently came about because of COVID – Zoom mediations and arbitrations. I handle maritime arbitrations in Miami, involving the cruise ship industry’s employees. In June of this year, I arbitrated a case where everyone appeared by Zoom. The Claimant was from Croatia.

My approach in mediations is to get face to face with the parties and lawyers. I do not think that a Zoom mediation is necessarily something that meets my style. However, perhaps it is necessary at this point in time in the pandemic situation.

What do you hope to accomplish through your ADR practice and how does ADR help make lawyers more successful?

I hope to accomplish getting lawyers to learn to talk with each other and get their clients to become “available” for the mediator to talk to all at the mediation conference.

How would your clients describe you and what they like most about working with you?

That I have experience. I have mediated over 2500 cases. I have been a trial lawyer so I know their problems in their cases. I also believe that my judicial background uniquely qualifies me to be an Arbitrator.

What is something your clients would never guess about you?

What is the most important lesson you’ve learned in your career to date?

The thing that I learned early in life was to always try to be successful. My Dad worked for the Post Office. My parents had no money to send me to college. I recognized that early and turned to sports. My initial love was baseball. Then I also started to play football. I finally realized that they were only giving 1-year baseball scholarships in those days. I turned my efforts to football. I became Captain of my high school team and received a 4-year football scholarship to the University of North Carolina. Essentially throughout my career, I learned that “Quitting Is Not An Option.” Also, “Failure Is Not An Option.”

If you weren’t a lawyer, what would you be?

I would probably have stayed in the insurance industry and been retired about 10 years ago.

Which characteristic do you admire most in others?

People with confidence in themselves.

How has your life experience made you the neutral you are today?

I believe that I am a good mediator and arbitrator because I understand people and their problems, and try and work with the parties.

What do you do in your spare time? How do you unwind?

What is your favorite holiday and why?

I like Christmas, particularly spending time with the grandchildren.

If you could have dinner with any one person, living or dead, who would it be and why?

Jim Barfield and Walter Beverly, my former Supervisor and Manager at Travelers Insurance Company, where I got my start in the real world.

What is your favorite book?

Not one specific book but most books about the Civil War, and about World War 1 and 2.

“FAILURE IS NOT AN OPTION.”